The latest version of our MapBox for iPad app has hit the iOS App Store! This release has both visible and under-the-hood changes that I’d like to highlight in more detail. 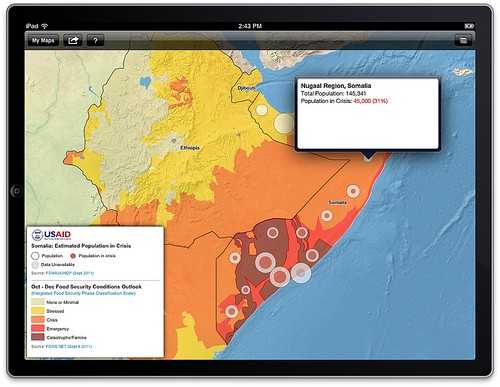 Legends stack on top of each other in the same order that their corresponding map layers are stacked, allowing for rearrangement to suit a particular presentation. Additionally, the entire legend interface can be collapsed with a simple left swipe on the content, and the state is remembered between launches of the app.

We spent a lot of time refining successive variations of the legend presentation interface, ultimately arriving at what we think is the best possible approach — simple, lightweight, and without extraneous user interface elements. In short, the interface is the legend, and nothing more.

Following up on our release a few weeks ago of Mustache-based tooltip templating in TileMill, we’ve brought this to MapBox for iPad as well. Generally, you won’t be creating these templates manually, but if you do, be sure to see the TileMill manual section on project settings. The main advantage here is that the HTML in tooltips and legends is sanitized for security reasons, which mostly impacts map embeds and other uses on the web. However, the iPad needs to display these, too, and does in fact render them as HTML in the app.

Last month we blogged about Apple’s issue, then resolution, with developers and iCloud backups. The latest version of MapBox for iPad now supports Apple’s new setting, as of iOS 5.0.1, for excluding files from cloud-based device backups. If you have a large amount of maps and other data in your MapBox app, you might want to visit the Settings app and tell MapBox not to backup your documents to iCloud in order to save some cloud storage space.

We made a variety of other small changes and fixes to the app as well:

Lastly, this version of the app now requires iOS 5 at a minimum. Since all iPads, first- or second-generation, can run iOS 5 and can ugprade for free, we decided to streamline development and take advantage of the latest technologies developed by Apple by dropping support for iOS 4.

As always, you can download MapBox for iPad from the App Store for free, and you can connect with us on Twitter at @MapBox.