Easy installation of TileMill, our open source map design studio, is one of the most requested improvements to the tool and something we’re actively working on. Currently basic command line skills and code compilation are needed to get started with TileMill. We are happy to say this is changing with two new offerings: a virtual machine with Ubuntu Linux and the latest Mapnik and TileMill pre-installed that can be downloaded and booted up from any operating system using VirtualBox, and a coming soon one-click Mac OSX installer for TileMill. 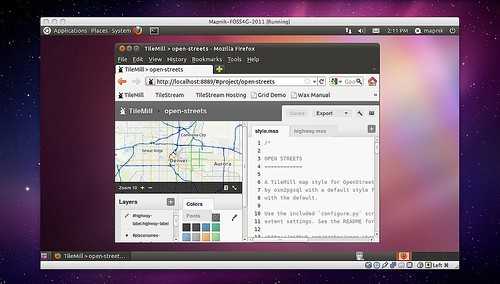 If you have not used VirtualBox, but have wanted to run an instance of linux on your Mac or PC, you will be amazed. This is something we use for running no-install, seamless teaching sessions like the Mapnik FOSS4G workshop.

To work with TileMill via the VirtualBox TileMill VM, first download and install VirtualBox 4.x for your given operating system — which can be Windows, Mac OS X, Linux, or Solaris. VirtualBox runs as a standalone application that allows another operating system (a “guest”, in this case Ubuntu linux) to run within VirtualBox on your machine (the “host”). Your system should ideally have several GB of free RAM, but it should work with less, albeit the guest will run a bit slower.

After installing VirtualBox, download the Mapnik Virtual Appliance (an .ova file) and import it into VirtualBox. You can find the latest download link at the support page. Expect the import to take 5–10 minutes.

After the import is finished, start the “Mapnik-FOSS4G-2011” virtual machine from the VirtualBox Manager. After being greeted with a login, open up Mozilla Firefox and find a bookmark for TileMill, which should already be running. For the user/password and additional details, see the support page for the TileMill VirtualBox VM.

Now you’re ready to design custom maps with TileMill. For more information on TileMill and for support documentation, check out support.mapbox.com.