The Open Atrium Beta 4 release is now available to download. The new release is simpler and easier to use while providing greater flexibility and customizability. Key changes include drag and drop dashboards, a cleaner frontend and admin UI, richer activity streams, and a more efficient feature-building workflow for developers. 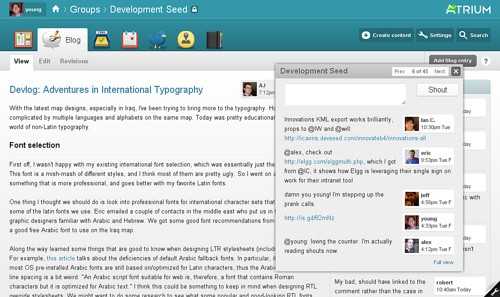 Drag and drop dashboards are the centerpiece of the new release. Site administrators and group managers can create multiple dashboards per group and customize them using existing blocks or create their own using the Boxes module. Regular users can customize their own user dashboard using the same set of tools. The core technologies behind the dashboards also allow developers to build contexts for their features by dragging and dropping blocks into place and tweaking them as necessary.

Per usual I couldn’t keep my hands off the interface. Beta 4 condenses and consolidates UI sprawl and also introduces several new components. A special palette region can be used for popup palette blocks and menu items can indicate new content with a small counter. Ginkgo, Open Atrium’s default theme, provides several alternative layouts for dashboards and leverages the new DesignKit module for logo and color customization instead of rolling its own solution.

We weren’t afraid of using new, and sometimes experimental, technologies in Beta 4. Admin, Context, Spaces, and Strongarm all received major branch or API upgrades. All of these changes are included upstream, and you are welcome to use them in your own projects as well.

Beta 4 also includes a custom testing AtriumWebTestCase class that extends the default DrupalWebTestCase to provide an Open Atrium install as the baseline for any integration tests. We’ve added several tests to the Open Atrium core features and expect many more to be added as development continues.

We’ve moved from using a central tracking repository to a distributed drush_make system for Open Atrium. The install profile is on Drupal.org, our custom configuration, theme, and features are on github, and any patches we’ve applied to upstream projects are transparently documented and applied through our makefile.

Whether you are new to Open Atrium or upgrading your existing site, you will want to read the Release Notes. Open Atrium is still very much beta software so please exercise prudence and caution. Upgrading a previous Open Atrium site without much customization is a weeknight task. Upgrading a site with extensive overrides and custom features is a weekend project. Take backups, make a pot of coffee, and roll up your sleeves. 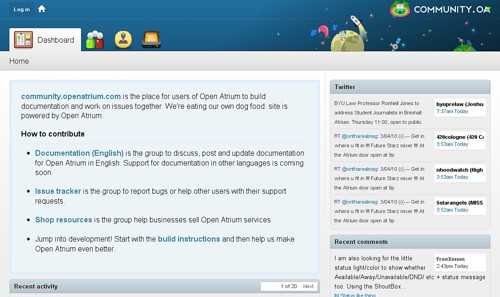 Community.openatrium.com has gotten a tune up and is a great place to collaborate. We’ve marked the documentation pages that have gotten a bit dusty in light of the new release and we’d love your help getting them up to date. Bugs and feature requests can be filed in the issues group. Eric blogged about the new space on community.oa that makes resources available to shops selling Open Atrium services. The group is the perfect place to collaborate and discuss ways to communicate to others how Open Atrium can benefit their organization.

In the coming weeks we’ll be posting our goals for Beta 5 and where we want to be before Atrium 1.0 goes stable for the long haul. But for now we’re happy to get Beta 4 out the door and into your hands.