September 6 2009: Just a few days after this post, dmitri committed a change which makes the drush make format the same syntax as Drupal .info files. I’ve updated the sample makefile below to reflect this change.

In between Open Atrium beta1 and beta2, I took a detour to release the first alpha of Feature Server. Feature Server lets you share releases of your features, themes, and custom modules with the world and provides release notifications to users using the Drupal core Update status module whenever you roll out a new version. We’ve provided a simple starter theme called Singular to help you get your own feature server branded the way you like.

Want to try this at home? Grab Feature Server off of code.developmentseed.org. The makefile and instructions for manual installation are available as well. Many thanks to Balint Csuthy (Pasqualle) and Dmitri Gaskin (dmitrig01) who both contributed extra polish and backbone to the code.

Say hello to [drush make](http://drupal.org/project/drush_make), clear evidence that while some people like to talk about cool things, Dmitri Gaskin prefers to write them. Drush make tracks down and pulls together all the parts of a Drupal site while you get a drink. You provide it with a makefile, which is a code description of the components of your site, where to get them, and other specifications.

Drush make is an big step toward sustainable Drupal distributions because it doesn’t just download packages - it checks each project’s Update XML feed for the latest compatible release. This means that a makefile may soon be useful not just for assembling your site, but for updating it, creating packages of installer profiles, and allowing Drupal distros like Open Atrium to be assembled in a distributed fashion, rather than tracked monolithically in a single repository.

In this demo, drush make is pulling Drupal core, modules, features, and themes into a single Drupal site. And it’s pulling them off of two sources - Drupal.org and code.developmentseed.org. But why stop at two? A makefile could point at any number of sources allowing Drupal distributions to be as distributed publicly or privately as they need to be.

Feature Servers and drush make have been made possible by a common format for describing Drupal packages - the project Update XML feed. And since it’s a feed, it can be aggregated, parsed, mapped, and stored by FeedAPI. This means that while Feature Servers are distributed, their projects can be aggregated into a master directory. code.developmentseed.org is a working example of this idea - not only does it host some of our features, but it is also a gateway to projects that Development Seed contributes to on Drupal.org. For example, when there is a new release of Internationalization on Drupal.org, code.developmentseed.org shows it and links to the latest download as well. 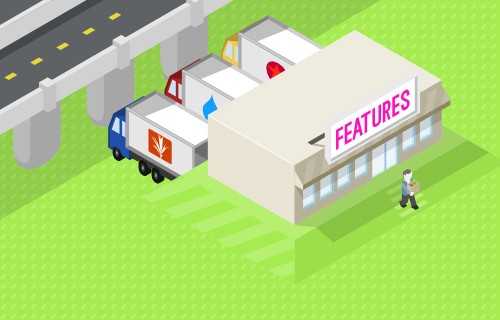 Up until today, we’ve talked about Feature Servers as a way of hosting and sharing features in a distributed fashion. What’s even more exciting is that by leveraging a standard XML format for releases there can also be a central directory — a Drupal Planet for features. Between a central Drupal.org features directory and more targeted distro-specific directories like those for Open Atrium, distinct audiences will have targeted entry points for getting to the features they’re looking for. This means more ways in for new users and more distribution channels for the community behind Drupal.

Excited about this future? Here’s a review of the parts, and the next steps for each: