The World Bank’s Communicate intranet launched last week on Open Atrium with nearly 1,000 users. Their communications team spread around the world is better positioned to collaborate now that their main communication tool is custom tuned to their specific business processes.

By starting with Open Atrium and the Features site building paradigm, we were able to address the World Bank’s custom needs on a broadly supported core code base.

Many of the core features of Open Atrium are key to the World Bank’s intranet, including the groups feature that allows users to create groups, add members, and enable additional features like a blog, wiki, calendar, and case tracker to the group as needed. These groups are used for all kinds of specialized conversations within the organization. For example, the global communications team can assemble a team of experts to respond to an emerging crisis by creating a group, adding the appropriate experts, and using the space to formulate a response.

Groups can be used in formal ways that map directly to some of the World Bank’s organizational structure and business processes, which were built into Communicate by customizing Open Atrium, and in more ad hoc ways to facilitate conversations around common interests. An interesting example of an interest group on Communicate is the Drupal conversation group, of which there are more than two dozen members who want to learn more about Drupal (and they even host meetups internally!). On the new site, finding colleagues with shared interests and needed expertise is easy thanks to a faceted search-based user directory that lets users identify others with a given expertise and invite them to a new group. 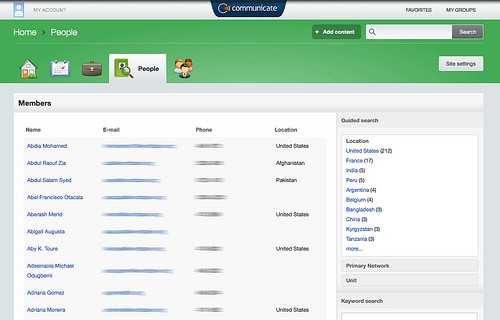 Moving to Open Atrium early made a lot of sense for the World Bank because their previous Communicate site, formerly called CommNet, was based on Drupal 5 and took advantage of Organic Groups and Spaces to let teams quickly create working groups and collaborate online. This is a key feature within Open Atrium and one that we’ve found is needed for many communication teams. The last version of the site was incredibly popular among World Bank staff since it put collaboration tools into their hands and let anyone who wanted to create a new group to start working with colleagues do so. This feature is now able grow with Open Atrium.

The new site makes it easy for people to see what their colleagues are working on. Users can add each other to their personal network (like following someone on Twitter) and keep track of what each other is up to with a friend feed-style activity stream. With so many people using the site and more to come, swapping out the typical Open Atrium dashboard paradigm for an activity stream was essential to help users cut through the noise and identify the information they want to see.

What is really cool about the new system is how we were able to leverage Open Atrium to build some very custom features that map directly to the World Bank’s internal business processes. For instance, there was a need for several kinds of formal groups with different levels of moderation and content access. We created learning groups that let facilitators lead various kinds of trainings, project groups to help organize team members working on specific business projects, and “Practice” groups that let formal practice leaders lead conversations and documentation related to specific practice areas like Governance or Crisis Communications. 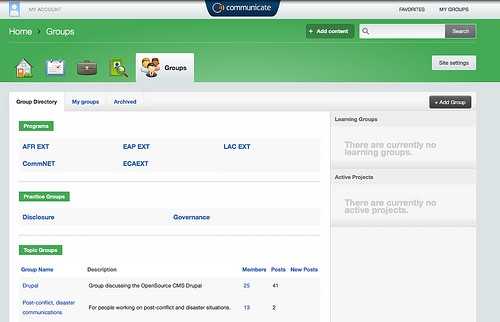 Within these groups, there are custom features like a moderated library feature for submitting formal resources such as issue briefs, talking points, and terms of reference for working with contractors. These too are all easily sortable with faceted search. 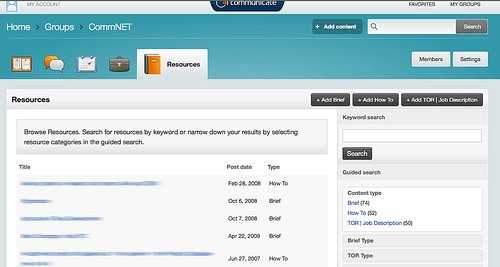 Project leaders can also post job listings for specific projects within their groups via a jobs feature, and administrators can post formal job listings for the whole World Bank in other groups. These all filter up out of groups to a central job board feature on the home page that lets users browse through all the opportunities across all groups on the site. 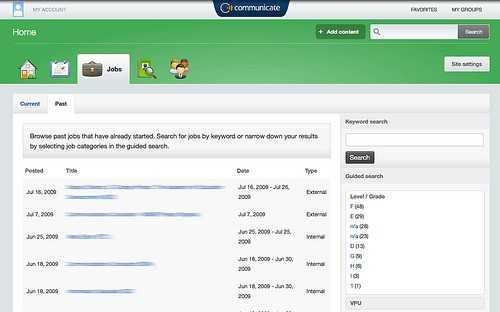 There are lots of other little details on the site that are harder to show in pictures — things like a flagging system (using Drupal’s flag module) to do anything from “favorite” content to mark a post for inclusion in a weekly email newsletter. Another one of these details is integration with the World Bank’s Siteminder access system from Computer Associations that provides single sign-on authentication as well as user profile information from their Oracle PeopleSoft HR system. Working with the Siteminder system led Ian Ward to write and release a new Siteminder module for the Drupal community, which he’ll discuss more in another post this week. The site also uses the MIT Simile Timeline visualization for looking at a large set of events, which we first deployed for the World Bank back on Drupal 4.7 and which easily slipped into the new Open Atrium system as part of a new calendar feature. 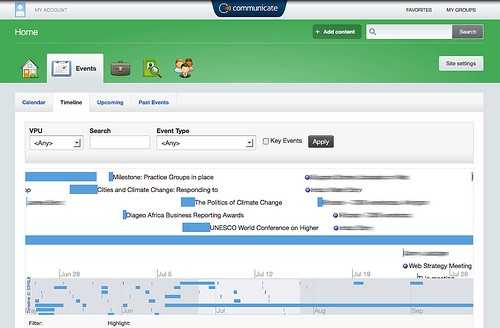 We’ve been excited about the opportunity that Open Atrium offers to large enterprises for a long time, and this project is the first public project that really helped us test what can be done with the Open Atrium code base for a very large organization. Open Atrium let us get out of the gates quickly on a fresh build and spend our time getting the details right on the customizations that deliver really high business value, like integration with third party systems and custom workflow development.

With this site in production and an internal team that is familiar with Open Atrium code and building with Features, there are now neat opportunities for the World Bank team to look at deploying new Open Atrium sites themselves for other intranet projects and even sharing Features between them. Customizations like their Siteminder integration feature might not help other organizations, but they make a huge difference for long term sustainability across the organization as other departments deploy Drupal and Open Atrium-based sites. Capacity building like this has always been a major goal of our approach to working with Drupal, and we’re looking forward to seeing what comes next as the World Bank and other large organizations explore this model for site building and deploying their own custom networks of knowledge management sites.