💥🇺🇲🇺🇲 If you have not done so already, register to vote 🇺🇲🇺🇲💥

Powerful mapping tools and hyper-specific information about citizens have made Extreme Gerrymandering possible. These new technical capabilities collided with an erosion of even the pretense of democratic decorum and in 2010 resulted in the creation of blatantly partisan electoral maps designed solely to preserve the fortunes of their creators.

As a result of Extreme Gerrymandering, Democrats need 56% of the national vote in midterm elections in order to win just half of the seats in the House of Representatives. The specifics vary state to state. Some states are unfairly and undemocratically rigged in favor of Democrats. In many more states, they are rigged in favor of Republicans.

The Brennan Center for Justice at the NYU Law School released a rich report on Extreme Gerrymandering and its effect on the 2018 Midterm Election. It is an in-depth look district-by-district at the state of Extreme Gerrymandering and what results would be necessary to overcome that engineered disadvantage in the upcoming U.S. Midterms. We created a prediction tool of the election results that allows you to fully understand the impact the team’s findings. You can create scenarios for a specific national or state-level vote result, and see which parties control the house for a given scenario.

Exploring the map reveals the techniques like packing and cracking that are used to create an undemocratic partisan advantage. Partisan mapmakers concentrate the majority of an opposing party’s population within a handful of districts (effectively conceding those seats) in order to spread thin the remaining population in the other districts. Our friends at Azavea wrote a great post on packing and cracking* in Pennsylvania. The boundaries that this post critiques have since been overturned as un-Constitutional and have been redrawn by the Pennsylvania State Supreme Court.

Extreme Gerrymandering persists in other U.S. States. For instance, in North Carolina, we can see the three Democratic districts close to the Eastern shore heavily favor Democrats, requiring Republicans to take an unheard-of 70% or more of the state-wide vote. The remaining districts all favor Republicans; two require roughly 53% of the vote, four require about 55%, and four more require over 57%. (Page 3, Extreme Gerrymandering & The 2018 Midterm.)

In Maryland’s first district, the state’s sole Republican district, Democrats need 82% of the state-wide vote. The rest are all safely Democratic.

A historical range provides context on past elections and gives you a sense when you’re approaching an unlikely scenario. 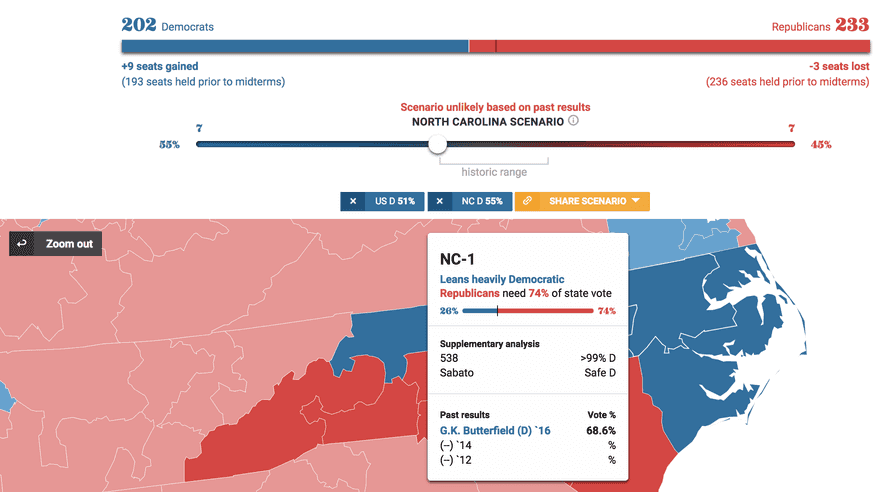 These manipulations of election boundaries result in a high number of districts that are not actually competitive. These districts “safely” vote for one party and often for the same representative for decades. In addition to the Brennan Center’s analysis, the tool provides past results and updated predictions from Five Thirty-Eight and Sabato’s Crystal Ball. This data provides a full picture of the political landscape and the likelihood of defying the partisan design of these districts in the 2018 election.

The best way to improve our politics and our democracy is to vote. For voter registration and polling information, visit Vote.org. Another great way to participate in the election is to work at a polling station. We partnered with the Fair Elections Center to create the Work Elections site to connect people to opportunities to work at a polling place.