With elections scheduled for late this year in Lebanon, lawmakers are considering proposals to reform the election law. Current debate on reform is based on assertions that are politically motivated and not backed up by data. The Lebanese Association for Democratic Elections (LADE) and Lamba Labs launched a data platform to provide open election data to facilitate evidence-based discussions on election reform as well as empower civil society to effectively engage in the process. The platform marks a growing community of election data hackers building tools for better, more fair elections. 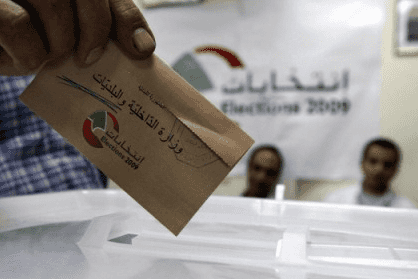 In Afghanistan and Tunisia, open election data supported better planning and execution of elections — helping election administrators to make more efficient use of human and financial resources, political campaigns to more effectively engage in voter targeting and GOTV efforts, and civil society to determine where to deploy election observers and place observation findings within a broader context.

In Lebanon, civil society is using open data far in advance of elections to facilitate evidence-based discussions on election reform. In advance of upcoming parliamentary polls, Lebanese lawmakers have been engaging in debate on how to reform the country’s legal framework governing elections. One of the key questions being considered is how to design an electoral system that is representative and inclusive, ensuring that the will of the diverse electorate is reflected and respected. Until present, data has not been used to inform discussions on electoral reform. Lebanon has not conducted a census in eight decades and there exists a dearth of credible information on present-day ethnic composition, religious affiliations, or gender breakdown. LADE and Lamba Labs, a local hacker space in Beirut, launched the Lebanese Elections Data Platform to provide data and trends on voter registration and participation by ethnicity, religion and gender. 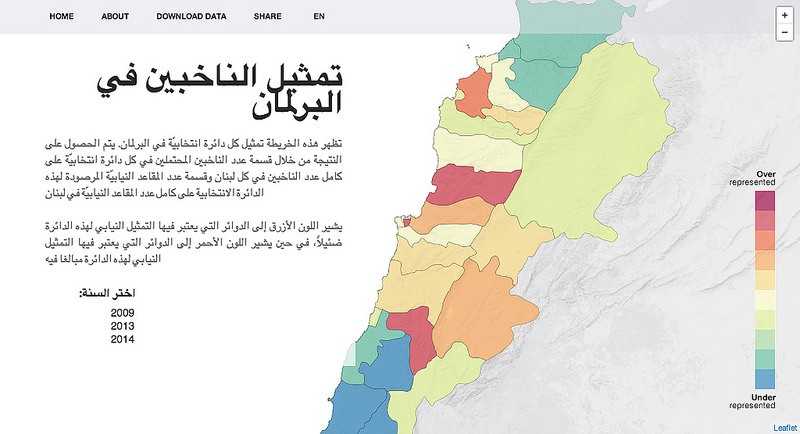 The tool processes data on voter registration between 2005 and 2014 to present a clear picture of the current population by district, demographic characteristics, and growth trends. 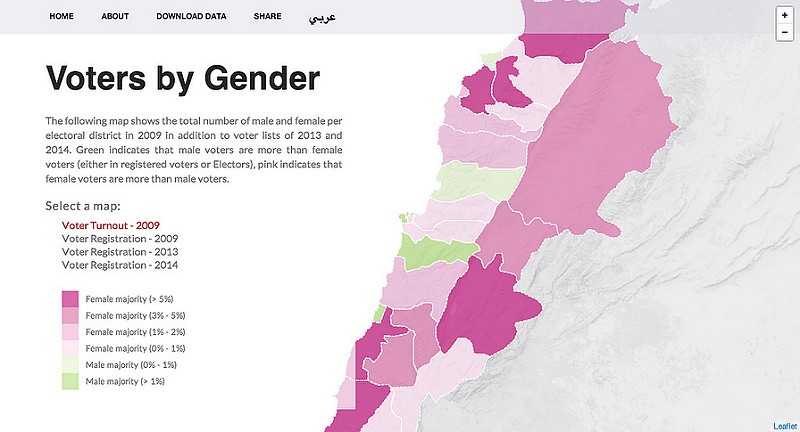 Women form the majority of the electorate, but less than 2% of Parliament. Visualizations ignite debate and advance understanding of developing policies and platforms that increase participation by women voters.

The Community of Election Hackers is Growing

Around the world a growing community of civic hackers are turning their attention to election data. The site was conceived and built in Lebanon by Lamba Labs and LADE. In Tunisia, the OpenGovTN community, a loose collective of civic activists and hackers, laid the foundation for the Tunisia Election Data platform by collecting and opening election data from the country’s first democratic elections in 2011. Mourakiboun, a civil society organization dedicated to ensuring credible and transparent elections, built on that foundation to analyze the data and develop the Tunisia Election Data platform. Lamba Labs, OpenGovTN, and civic hackers all over the world are increasingly playing lead roles in helping to advance democracy by using open data and applying technology to help contribute to better elections.

Development Seed and Democracy International helped by providing strategic guidance and connecting LADE and Mourakiboun with like-minded civic hackers. However, Lamba Labs also received integral support from the OpenGovTN community, which offered ongoing technical support. Given their experience partnering with LADE, and based on what they learned from OpenGovTN, Lamba Labs is now embarking on a new effort: starting an OpenGov community in Lebanon. The birth of the @openleb project community, predicated on an understanding of the important role that civic hackers can play in civic life, is an important and welcome development.

Development Seed is excited to be part of a dynamic and growing community of election hackers in Tunisia, Lebanon and all over the world.