the World Bank only supports citizen-mapping efforts that give users free access to the map data they create.

This means that the World Bank is not going to be supporting Google Map Maker or using it in its operations, nor advising its partners to because of the closed data policies of Google and the restrictive Terms of Services that essentially transfer rights to contributed data to Google.

This comes after the World Bank’s announcement of an agreement with Google in January over Map Maker left many wondering about the implications of the deal and whether the World Bank had changed its open data policies.

Today the World Bank clarified that the purpose of the agreement with Google is limited to expediting data procurement from Google Maps, and explicitly not contributing to it.

Questions have been raised about our partnership with Google for the use of Map Maker data. The single goal of this joint project is to provide UN agencies and governments faster access to Map Maker data for humanitarian, development and disaster preparedness efforts.

In short this agreement is great, Google is hooking up the international development community with proprietary data, which will only help the Bank especially in times of emergencies while the Bank is directing the larger international community to stay focused on open data.

Now all eyes turn to OpenStreetMap. Unlike Map Maker, OpenStreetMap provides simple, complete access to its entire database under an open license. Today’s announcement validates the great humanitarian and international development work being done with OpenStreetMap — some of which is actually enjoying World Bank support, like the Humanitarian OpenStreetMap Team’s work in Indonesia and mapping Tandale in Dar es Salaam. 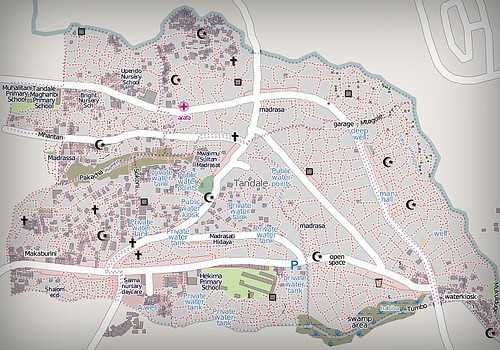 OpenStreetMap work in Tandale, Dar es Salaam was funded by the World Bank

While today’s post does not amount to an official endorsement of OpenStreetMap, the direction is promising. Recent contributor base growth suggests that high profile endorsements of OpenStreetMap can translate directly into contributed data. The responsiveness of the OpenStreetMap community and its open geo infrastructure present a huge opportunity for the World Bank, while OpenStreetMap stands to benefit from increased use as an open geo data platform for humanitarian aid and development.

Most importantly, citizens on the ground own their own data allowing the Bank to be a true participant in local development — a premise that we believe will ultimately make for better data.