Access to media and news is severely limited in Afghanistan. Internews, as part of its support of local media efforts, just launched a data visualization of the media landscape in Afghanistan, mapping comprehensive survey data on media usage and access in the country. This hard data helps Internews and other organizations target their efforts on the ground and decide what actions need to be taken first.

Commissioned by USAID, its partner Altai Consulting conducted 6,648 close-ended interviews across 107 districts in all 34 provinces of Afghanistan. We then processed this data to visualize the survey results, making the data easy to explore and easy to reuse. The site lets you explore people’s access to the radio, television, mobile phones, and the internet — with internet access being the most limited at just 9% in the country as a whole. On the internet tab, hovering over provinces reveals five provinces where citizens reported they had no internet access. 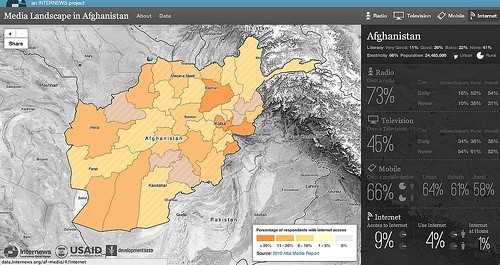 In Baghdis, which does not have any internet access, only 22% of the nearly 500,000 citizens have electricity and 70% are illiterate. Similar stories appear for other provinces without internet access, such as Zabul, Laghman, and Uruzgan. All are rural, all have high illiteracy rates, and all are without internet. Digging deeper into the maps shows that some of these provinces without internet do have access to other media. Uruzgan and Laghman have very high access to radios and mobile phones. In Uruzgan 99% of respondents reported listening to the radio daily and 90% own a mobile device, with numbers at 77% and 73% respectively in Laghman. 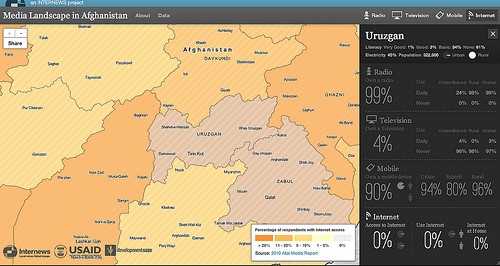 Data captured in the survey and visualized on data.internews.org/af-media helps inform Internews’ strategies for supporting local media initiatives in provinces throughout Afghanistan, which is reflected in their support of 46 local, independently operated radio stations. By focusing on radio infrastructure and training local journalists to reach rural areas, Internews empowers citizens in the difficult realities of low electricity and high illiteracy. Read more about Internews’ work with this survey on their blog post.

All of the survey data is available through data.internews.org/af-media/data, and is released openly and available to download, process, and work with.

All maps on the site were created using the free and open source map design studio Tilemill and hosted with MapBox. To learn how to start creating maps yourself, check out the documentation and support guides on Mapbox.com/help.