I’ve recently joined the MapBox team at Development Seed full-time, after months of collaborating together around using maps offline on devices like the iPad. This means that I’ll have more time to advance the iOS platform for the MapBox for iPad app, a free app that lets you use your own data on custom maps on the iPad. I’m excited to be moving this work forward, and in this post will give you an idea of our current plans for the next version of the app.

Our main focus right now is on what we’re calling interactivity — embedding map data on a per-pixel basis into MBTiles files to allow apps to provide more contextual information when users explore the map at all zoom levels. For example, this could include traditional map legend data. And since it’s provided as raw data, you can determine how it is presented and interacted with on the map. We’re hoping that this allows the strengths of our various platforms (web, touch device, etc.) to shine through. 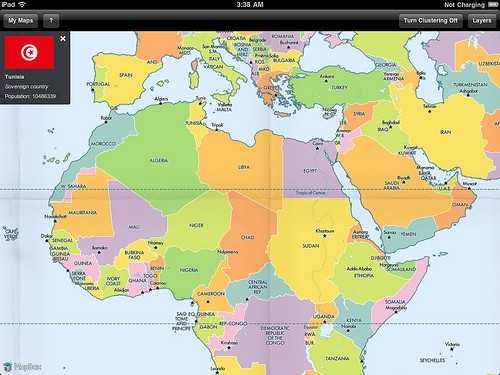 Soon we want to add functionality to pull in traditional web-based tiles, similar to the way the iPad app already does for OpenStreetMap. Although MapBox for iPad was designed to work in a completely offline environment, this will allow the app to access a host of map services that already exist and are available online, expanding its reach and the possibilities for overlaying data.

One area that we intended to focus on a while back was allowing the app to show maps on an external display. This is ideal for presenters who would be able to show their maps firsthand on a big screen, but it proved to be very difficult with the original iPad, as it didn’t support hardware mirroring. This meant everything you wanted to show on an alternate screen had to be drawn manually, which meant two copies of every map object, which meant bad performance. We’re anxious to get our hands on the iPad 2 to check out its video mirroring feature, which allows for trivial, hardware based HD mirroring on an external display. We decided it was better to not kill ourselves over this feature and instead wait for Apple to improve things, and they didn’t let us down.

Lastly, we’re continuing to explore new ways of handling overlay data such as GeoRSS subscriptions, as well as generally making overlays easier to understand and explore on top of base map layers. Look for some more good stuff here.

I’m really excited to get moving on the next phase of our iPad work, and to officially be a part of the team at Development Seed. As always, leave us your feedback here, or head over to the App Store and leave us a review!