This morning the U.S. Chamber of Commerce’s Business Civic Leadership Center launched the Pakistan Flood Response Map, which profiles over 130 NGO’s working on over 400 projects related to flood relief efforts in Pakistan. The site’s goals are to show the U.S. business community what resources are needed as Pakistan transitions from recovery efforts to reconstruction and to allow businesses to directly contact NGOs working on the ground. Highlighting actual NGO needs like this and allowing businesses to identify where they can leverage their expertise with NGOs needing assistance in a specific vertical are the first steps toward expanding public private partnerships.

The site is simple, showing projects operating per province. 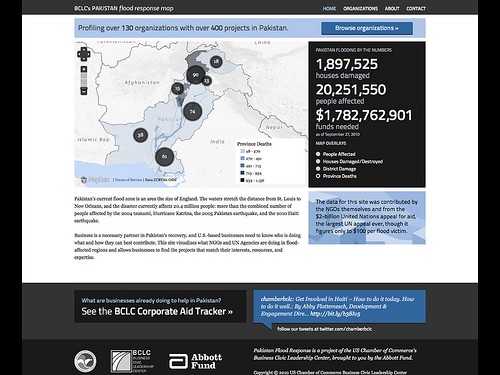 The site directs users to browse organizations and use the integrated faceted search to instantly filter NGOs by province, business sector, cluster, and cross cutting issues. 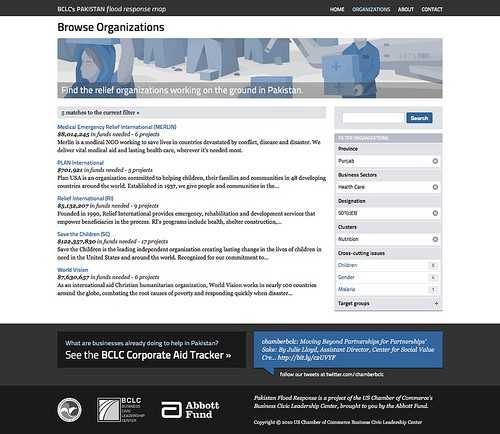 Each NGO profile paints a picture of where they are working, who they are helping, the resources they need, and what kind of partnerships they are looking for. The data used on the site was contributed by the NGOs themselves and taken from the $2 billion United Nations appeal, which is the the largest UN aid appeal in history. 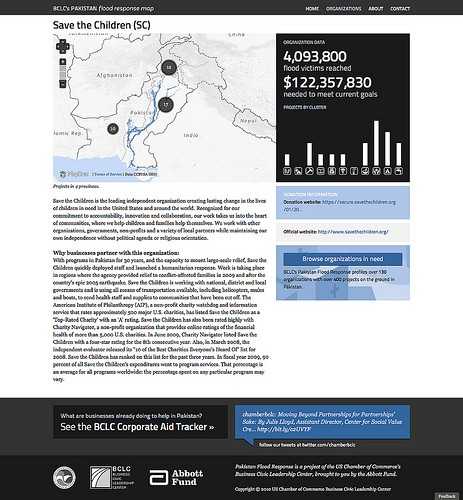 To add context to the situation the site has an interactive map on the front page that allows users to zoom in to see the extent of the flooding that first started in the northwest in early August. 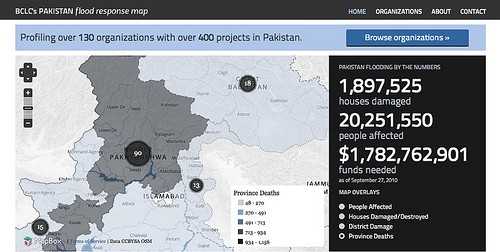 In addition to a custom baselayer map of Pakistan, we also made an overlay showing the extent of flooding. This uses digitized satellite imagery from UNOSAT as of September 16th. Combining map overlays helps us tell complex stories on where the greatest needs exist in Pakistan. Here is an image of districts that are severely damaged, according to Pakistan’s National Disaster Management Authority: 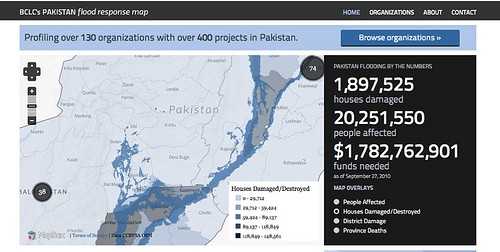 While the site is very light (there are just three types of pages), it uses some cutting edge technologies like Searchlight and TileLive, a dynamic mapping tool that, for example, draws shaded polygons to help clearly show the number of people effected and number of houses destroy. We will write more about this new mapping tools in the coming weeks.

The Pakistan Flood Response Map was launched today on the second day of the Business Civic Leadership Center’s Global Corporate Citizenship Conference by Emily Drew, the project lead at BCLC. Both Pakistan’s Foreign Minister Shah Mahmood Qureshi and the Ambassador of Pakistan to the United States Husain Haqqani are attending the event, along with folks from dozens of the largest U.S. companies and leaders from major NGOs and government agencies like the American Red Cross, CARE, the International Rescue Committee, Oxfam and USAID. We hope to update this post soon with pictures from the event.

Again, check out the site: www.PakistanFloodResponse.com.