We just released a new map tileset of Pakistan on Mapbox.com as part of an upcoming project we are doing with the New America Foundation. While this work specifically focuses on visualizing data from the Federally Administered Tribal Areas and the North-West Frontier Province, this new map covers the whole country. 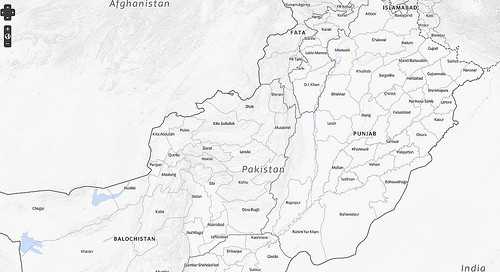 The base dataset used for the boundaries is the Global Administrative Units Layers. Like our Afghanistan tiles, we expect many users of these tiles to be NGOs, and this is the datasource that many organizations working in Pakistan recommend.

A number of sources, including the United Nations, were consulted to decide the best method of displaying borders in the disputed parts of northern Pakistan/India. While the actual line data from GAUL was not modified, some adjustments were made to the data table to allow for more fine-grained styling of the lines to better reflect their status.

The entire disputed region between Pakistan and India is marked with a dashed outline. A dotted line marks the ‘Line of Control’, showing which part of the region each country currently administers. Note that the line of control is not complete — according to several sources the Line of Control at the northeast end is not established enough to map. 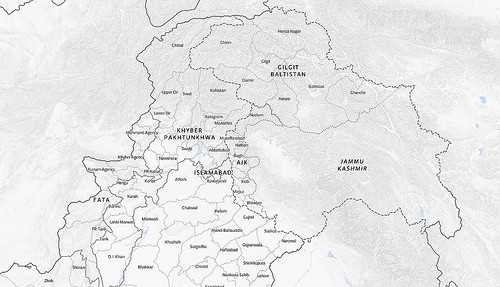 In addition to landforms and boundaries, a subtle combination of slope and hillshade visualizations is included. These give further context and insight to the borders, rivers, and regions on the map. The source for the digital elevation model used to render the hills is SRTM, using our merged geotiff of CGIAR-sourced SRTM tiles.

The folks at the New America Foundation have been very supportive of the the open data work we are doing and have done some great data-gathering in this region themselves. Their mapping of drone strikes is, as NPR put it this morning, “as comprehensive as any that exists right now.” Look for that data and other details to be mapped on these tiles very soon.

I especially want to thank Akiko Harayama and Andrej Verity from OCHA, Brody Dittemore from DAI, and Lucas Keene from the State Department for their help talking about the data with us and reviewing earlier versions of the map.