Last week I got the chance to present some work we’re doing on Managing News and SlingshotSMS at the Innovations in Mobile Data Collection for Social Action workshop in Amman, Jordan. It was an eye-opening event that brought together representatives from the Iraqi government’s Central Organization for Statistics and Information Technology (COSIT), UNICEF Innovation, and several dozen experts on the cutting edge of mobile technologies, data visualization, and mapping.

The workshop was organized by Mobile Active with the goal of bringing new technology to bear on the challenges involved in Iraq’s efforts to meet the Millenium Development Goals. We focused on using mobile phones for data collection around child malnutrition and school attendance. The Iraqi government and UNICEF are looking to collect this information so they can better design and target their interventions.

Several participants have blogged elsewhere about the difficulties on the first day of bridging the jargon-gap between the technologists and the development workers. Yes, the geeks spoke too fast and focused too little on storytelling during the first day’s Ignite Talks. True, the development folks could have communicated more effectively about the goals of the project or the context in which they were working. As someone who has tried hard throughout my career to straddle these worlds, I can attest to a few painful moments.

But that’s not the story here.

When Development Seed was first getting started seven years ago, this sort of event would have been unthinkable. For me the chance to participate in passionate, intelligent, and creative discussions with high-level representatives of a government and the United Nations about how technology can be utilized to solve some of the world’s most challenging development problems was amazing. Even better, many of the tools and strategies discussed will be piloted early next year and rolled out in the months following that. This workshop was the real thing. Real decision-makers working with leading technologists to design and implement a project that would be rolled out in the real world on a scale big enough to matter.

We had great discussions about strategies for verifying data, making mapping participatory, visualizing data, and incentivizing participation in crowd-sourced data collection projects. The range and depth of experience of the attendees ensured that the conversations were peppered with examples of previous work conducted across the Middle East, Asia, and Africa. COSIT deserves a lot of credit for their willingness to adopt these tools as well as their active and critical participation in the group discussions. The UNICEF Innovations team also deserves recognition for spearheading the development and deployment of these technologies in a famously slow-adopting UN system. If this is the future, I like it.

For my part, I was there primarily to talk about Managing News. Properly designing and implementing mobile data collection campaigns is challenging, but once the data comes in, what do you do with it? How can we take the information that’s been gathered and make it actionable?

Out of the box, Managing News allows teams to track, sort, visualize, and search large amounts of information that comes in via RSS feed, primarily news feeds and blogs. Since it’s launch in October, we’ve also been doing a lot of work to make the system more pluggable, configurable, and accepting of different kinds of data. Tabular information in csv format was the first step and we were able to use that with great success on a tool for analyzing the results of the 2009 Afghanistan election, shown below. We’ll write more about this project in the coming days. 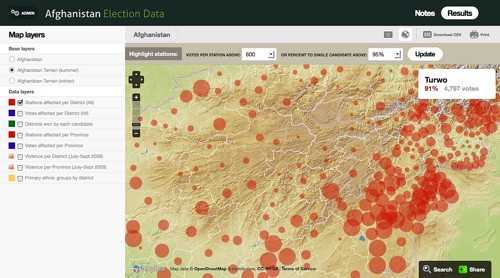 The next logical step, and more germane to last week’s workshop, was to build integration with SlingshotSMS. Slingshot is a lightweight SMS gateway that can be run off of a USB drive, needing only a GSM modem and an internet connection to act as a bridge between mobile phones and the web. I’ve been making time over the last few weeks to develop a proof of concept Managing News feature and the results have been great. I was pleasantly surprised at how pluggable the latest version of the Feeds module is, and within a few hours, I had a working setup that accepted SMS messages and integrated them into the system in the same fashion as they would items off of incoming RSS feeds. What this means is that they can be automatically geotagged, searched, and dropped into channels — fully integrated into the Managing News workflow.

The Managing News-SlingshotSMS feature will be released sometime over the next few weeks. With the basic functionality in place, the last remaining task is to finalize the authentication process. You can look forward to a fun post on API key authentication and GSM modems when it’s ready.