With the launch of Managing News we have released Feeds, the intended successor of FeedAPI. Feeds is a next generation import and aggregation API that applies lessons learned from three years of intensive work with aggregation in Drupal. This is one of the outcomes of our work on Managing News that we are most excited about. We’d like to again thank the Knight Foundation for their vision to support the improvement of fundamental aggregation tools for Drupal, which helped create Feeds. In this post I’d like to explain the reasons for building a new aggregation and import API, the design goals for it, and what this is going to mean for FeedAPI.

It’s over two years now since a conversation at OSCON led Ken Rickard to post the Aggregator API proposal. That resulted in the successful Google Summer of Code project, Feed API, which has been developed and maintained largely by Aron Novak. Since then, we have used FeedAPI on many (perhaps most) of our projects and we have dedicated significant resources toward improving and extending it.

Over time, the flexibility of FeedAPI’s architecture started to pay off. For instance, we used it to aggregate RSS and Atom in Managing News, import compressed CSV crime feeds for Stumble Safely, and create events from iCal feeds for Open Atrium. Feed Element Mapper gave us granular control over mapping feeds to Drupal content. A series of contrib modules mushroomed to plug into FeedAPI to offer additional functionality.

However, as we addressed these and many other use cases with FeedAPI, its limitations became clear.

As many of these issues slowed down day to day development for us, design debt became critical to address.

The goals for the rewrite

We took the launch of Managing News as an excuse to push hard on a rewrite of FeedAPI with these goals in mind:

What’s in the box

On October 20th, we released the first version of Feeds. If you download Feeds today you’ll get: 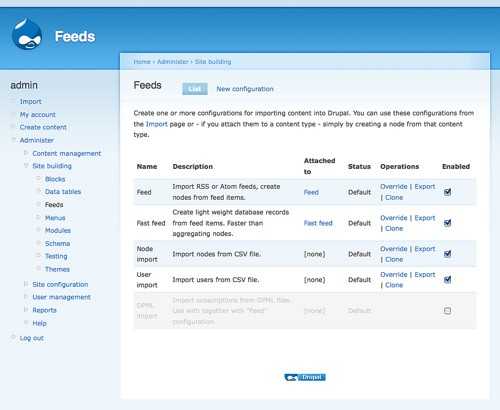 Beyond what’s already available, there are a couple of interesting potential additions and improvements to Feeds that are planned or that we are very interested in getting in:

What does this mean for FeedAPI?

Aron Novak and I will start to phase out FeedAPI maintenance effective with this blog post. The goal is to find a new lead maintainer by the end of the year and to keep additional features in FeedAPI to a minimum. The same applies to dependent modules like Feed Element Mapper or CSV Parser that we are maintaining.

As far as I can see there is no reason to pull FeedAPI into Drupal 7. It can be completely replaced by Feeds for D7 (of course, this is open source code and anybody is free to step up and upgrade FeedAPI). Feeds supports the #D7CX movement, and there will be a full D7-compatible version of Feeds the day Drupal 7 is released.

A FeedAPI upgrade script to Feeds (#596584) is planned, but we will need serious help with testing and maintaining it. At Development Seed, we do not have many legacy FeedAPI systems that need to be upgraded, so we will have a shortage of “guinea pig” sites for testing corner cases.

You will notice that Feeds still carries the ‘alpha’ label. The main reason for this is that we would like to keep the flexibility for adjusting Feeds to new use cases as early adopters work with it. The overall architecture is solid at this point, and we are using it in a series of production sites including Managing News. It is currently at a level where feature compatibility between minor versions can be guaranteed, but cautious changes to the API may still occur.

I would like to encourage everybody who has a stake in Drupal aggregation or content importing to take a close look at Feeds. This is a module that could make your life much easier. :) Up until the first beta release, API adjustments to accommodate your use cases are still possible, so your contributions and feedback are always welcome. I’ll look forward to interacting with everyone more in the queues.