Over half the world’s population lives in urban areas, many in unplanned urban sprawl. The high rate of urbanization is a major challenge for keeping cities safe, resilient, and sustainable — the aim of the UN’s Sustainable Development Goal 11. One component of achieving this goal is tied to accurate maps of buildings. With complete maps, urban planners can more effectively improve infrastructure including public transit, roads, and waste management. Toward this goal, we’re working on machine learning (ML) tools to recognize buildings and speed up the urban mapping process.

Autonomously mapping buildings remains an area of active research as human-level precision is very difficult to attain. However, this doesn’t mean that existing algorithms aren’t beneficial. Simply suggesting where to map — instead of actually doing the mapping — can still improve mapping efficiency by helping human mappers spend their effort more efficiently. Based on model performance, we can roughly break the algorithm’s usefulness into three tiers:

Our current building prediction tool is somewhere in the low to medium precision range. We’re testing an approach that uses Google’s DeepLabV3+ segmentation algorithm. Like other segmentation models, it’s designed to make a prediction on whether each pixel is part of a building. We chose DeepLabV3+ because it is relatively powerful (making use of developments like depthwise separable convolution, atrous spatial pooling, and an Xception backbone) and has been a top performer on competition datasets including PASCALVOC and Cityscapes. A number of other groups have generated positive building mapping results including SpaceNet Challenge participants, Azavea, Mapbox, Microsoft, and Ecopia.

We trained the model using RGB images from the SpaceNet Challenge dataset, which draws from a broad set of regions. Specifically, we combined data from Las Vegas, Paris, Shanghai, and Khartoum. Our aim here was to train a single broadly-applicable model trained that will perform well in many areas of the world. We also used tweaked the model’s prediction task — instead of predicting if each pixel belonged to a building or not, we applied the signed distance transform using scikit-fmm (as shown in the following figure).

Process of training a building segmentation algorithm. Using RGB satellite images (left) and true building locations (middle), we train an algorithm to recognize which pixels belong to a building. The animation shows progressive improvement from early to late training. Pixels are colored based on the signed distance transform, which encodes their distance from a building border. Red pixels are inside a building boundary while blue are outside and color intensity indicates absolute distance from the border.

We’ve deployed this in our UrChn tool to track Urban Change. UrChn allows users to superimpose a grid over urban zones where hot colored squares indicate areas that the model predicts a larger building footprint (in sq. meters) than exists in the OpenStreetMap baselayer. As mentioned earlier, the goal is to direct mappers to regions where their efforts would be most beneficial rather than directly predict building footprints. 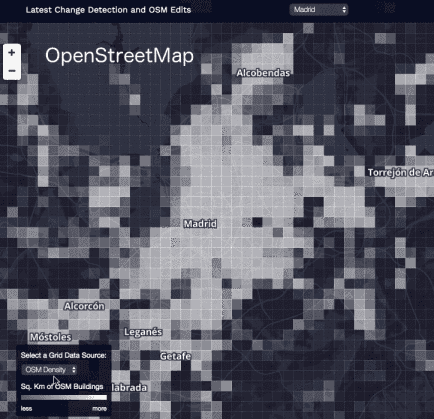 Building detection model can guide mappers to areas needing the most attention. In UrChn, the total estimate building footprint is calculated in two different ways: (1) using OpenStreetMap and (2) using our ML-based building detection model. We then compute a “difference map” between two building footprints to help visualize the areas that are under-mapped. In this example, we only ran the building detector within the boundaries Madrid proper (hence, zero predicted buildings in the suburbs near the animation’s edges).

There are a number of future improvements we hope to add:

This project is not open-source yet, but we plan to release it as the work moves from a research project to a more stable tool.