Yesterday ISIS captured the Baiji oil refinery. Using Landsat 8’s Infrared Bands, we detected fires around the refinery from the first day of fighting. Analyzing satellite imagery to see beyond the visible light spectrum enables a better understanding of the situation on the ground.

Landsat-8 is an excellent source to observe events from space. Landsat-8 sensors capture visible light as well as infrared. To analyze the Baiji Fires we used three of Landsat-8’s 11 bands:

The 753 false-color composite is useful for a range of applications from forest-fire management and post-fire evaluations; monitoring vegetation characteristics for environmental or agricultural applications; monitoring substrate to understand spatial distributions of soils, sands, and minerals; and the delineation of human landscapes. Here we use it to detect fires around the Baiji oil refinery.

To create and publish the false-color composite I used entirely open source tools:

I used ImageMagick to create the false-color composite. Also, color, saturation, gamma, and contrast levels were altered to pull out certain features. Here I combined the 7, 5, and 3 bands of Landsat-8 and adjusted the contrast to highlight the fires:

Because ImageMagick is not geoaware I created a Tiff World File (.tfw), using libgeotiff. This reconnects the geo information that is lost when you use ImageMagick:

Finally, I used Tilemill to make the final map and pushed the image to Mapbox.

On-site fires are a natural part of refineries. Gas flares (or flare stacks) will be visible at the Baiji refinery during normal operation. To better understand what fires were caused by fighting, we used imagery from before the conflict to establish a baseline. The map below compares Baiji imagery under normal operating conditions (May 14; on the left) and imagery from (June 18; the right image) after the first day of fighting. Fire in Baiji Oil Refinery in Iraq Edit descriptiondevelopmentseed.org

On the June 18 false-color composite we can easily detect a smaller fire southwest of the main blaze. When we compare to the May 14 image we see that this is a new fire. We quickly flag it for further investigation. Zooming into the satellite basemap shows what appears to be vegetation that is on fire. 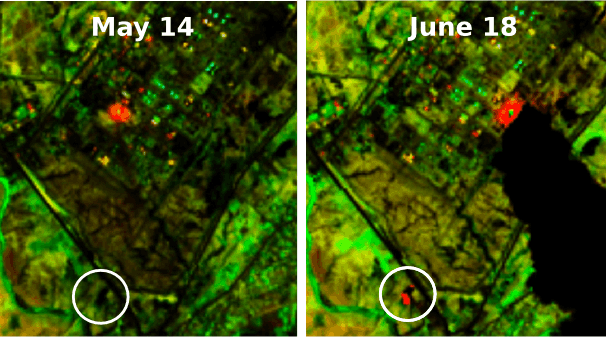 Baseline image does not show fire activity in lower left of the facility. A fire is detected in this area on June 18.

Check out Mapbox’s tutorial for an overview of processing satellite imagery and the code I wrote to produce the false-color.