StreetEasy.com just switched to MapBox.com hosting, setting them up to save $250,000 this year compared to paying Google’s new 2012 map API fees. More than just being a huge cost savings, the map they designed in house using OpenStreetMap data in TileMill and integrated on their site using Leaflet just looks sick and gives them nice editorial control over everything from neighborhood boundaries to what labels show up where, details that matter when your product (real estate) is all about location. With MapBox hosting’s compositing, they can add additional map layers without redoing their base map or seeing a performance hit. Sebastian Delmont, who leads the technical team at StreetEasy just blogged the details about the switch in “Good bye, Google Maps… thanks for all the fish”. I wanted to highlight a couple key excerpts, which hint to the much larger trend of a convergence of open data, open source, and a large field of mapping providers. This ain’t 2005 any more.

StreetEasy decided to build our own maps using, among other tools, OpenStreetMap, TileMill, MapBox and Leaflet, instead of paying hundreds of thousands of dollars per year to Google. And yes, the money pushed us into doing it, but we’re happier with the result because we now control the contents of our maps. more

We did the math and came up with numbers that reminded me of Oracle licensing in 1999. Six, seven, eight hundred thousand dollars. We met with Google salespeople, expecting to negotiate better terms, and they were nice, and they offered us discounts, but only to about half of what we’ve calculated. more In our opinion, their price was off by an order of magnitude. It’s very, very hard to work out a $2 CPM cost in any site’s business model, when most of the time, if you’re lucky, you’re making $1 CPM off your pages. And yes, StreetEasy does much better than that, and it would not have bankrupted us, but it would have also meant giving away a significant chunk of our profits. more

Pricing wise we think this will cost StreetEasy around $1,000 a month hosting with MapBox. They are set up with a $499 Premium account and are using the new pricing add-ons that we just rolled out. This is more than just talking about gig transfer, this is about compositing, analytics, and simple API integration, and here they are on MapBox. 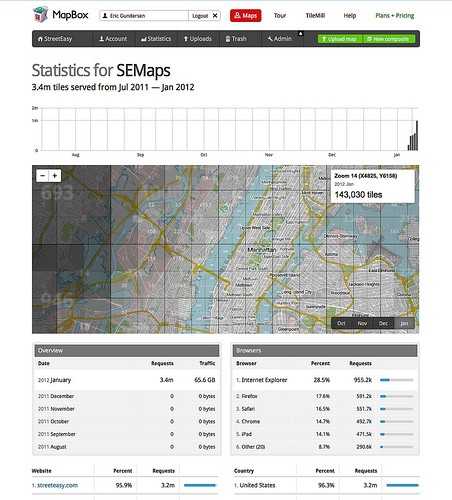 A look at StreetEasy’s main NYC base layer in MapBox’s analytics.

The pricing conversation part is big, but what is bigger is how hot this map looks and how much that matters. Beautiful maps matter. It matters to both StreetEasy and it matters in general and our bet is that once people realize how easy it is going to be to make custom maps with TileMill and awesome open data sites like OpenStreetMap there is going to be a larger paradigm shift. As Sebastian said, “I think 2012 is going to be the year of the Open Map. And I’m happy to be part of the front lines.” And StreetEasy is not alone. This move follows on the heels of Neil Sweeney’s post on Fubra making the move to “Google Maps Free Alternatives” and more recently Ed Freyfogle from Nestoria blogging on “Why (and how) we’ve switched away from Google Maps” and in general fresh excitement around OpenStreetMap just rocking, like MIT’s post on “‘Wikipedia of Maps’ Challenges Google”. Just today Sean Larkin from ThinkShout, a creative open source team that does a lot of environmental work out in Portland captured what this shift means for even small NGOs.

While beautiful maps have been a staple of the web for the last decade, development of highly-customized maps historically has been expensive and has required a very specialized skill set and tools…Fortunately, the advent of HTML5, CSS3, jQuery, and other modern web technologies has paved the way for new, open source, cross-platform compliant mapping technologies to develop stylish and interactive maps. more

This market here could be huge. Google has been saying that they are only going to be charging 0.38% of users that are over their TOS limits — but that is still 4,000 people based on estimates from BuiltWith.com, which has tracked 1 million sites using Google maps. Market wise this breaks down to: 19.7% news/media, 14% businesses, 10% shopping, 8% travel and 5% government.

Like I said last week when I blogged about our investment priorities for the year, 2012 is going to be awesome.