We just rolled out tile compositing to TileStream Hosting, radically increasing the speed of our maps by merging multiple map layers into a single map layer, all while still preserving the fast mouse over interactivity from maps made with TileMill. Compositing not only decreases the total size of one image versus many, but it reduces the number of images a browser downloads and how many it needs to move to pan a map — making maps not only load faster, but feel faster. 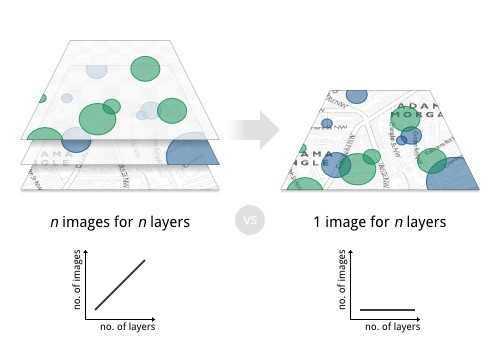 Compositing is going to change how people build maps. It opens the door to a more “Lego style” map building approach, where you can quickly take different map layers and stack them using TileStream’s map maker tool. 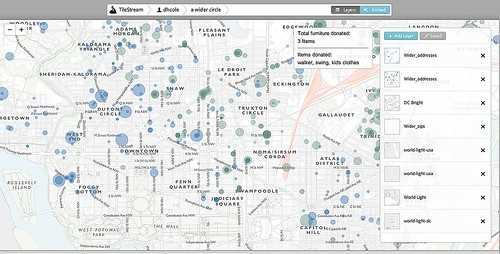 Now all these layers are automatically composited together into just one layer. In the case of this ‘A Wider Circle’ map, it will reduce the load of layers from eight down to just one!

In addition to the speed wins from compositing, we also rolled out Modest Maps as TileStream’s default API, which is a much lighter mapping API than OpenLayers. This is the API that allows us to do one click YouTube like map embeds directly from TileStream. As Tom mentioned in his blog post earlier this month, this upgrade to Modest Maps reduces our API payload from 400KB down to 50kb, increasing download speeds by 800%. TileStream’s API is even smaller than the highly-optimized Google Maps API (which we also support as an option in TileStream), which weighs an average of 150KB (though its size varies based on user and browser). This means that every single site that embeds a map will now benefit from these speed improvements.

Together, compositing and Modest Maps adjustments make our maps flat out faster than Google’s maps. This is huge for the organizations using TileStream Hosting to serve maps to users in low bandwidth environments, but also a big deal for everyone trying to make more and more complex maps that need to load fast everywhere. Speed matters, and fast maps encourage people to actually use and play with visualizations.

The wins from speed are only more true when you are targeting mobile users. In addition to these new speed wins, in mobile browsers you also need the same level of interaction of the maps, like being able to pick and double tap to zoom around the map. Mobile support now comes fully out of the box with TileStream. Every TileStream embed code has mobile interaction functionality built right in. You don’t even have to think about it to get a mobile mapping win now, just use TileStream.

We will be blogging more in the coming days about some new map layers that AJ is working on for MapBox that take advantage of this new compositing.