Earlier this week I arrived back in Washington, DC after a two week stay in Port-au-Prince with the Humanitarian OpenStreetMap Team where I conducted training and outreach around using OpenStreetMap to help with the earthquake recovery efforts. Overall the trip went well and my partner Nicolas Chavent stayed in Haiti for another week where he’ll do further training and surveying.

Our second week in Haiti focused on two main projects: surveying Jacmel, a city outside of Port-au-Prince that sustained damage from the earthquake and is also prone to flooding, and hosting an OpenStreetMap mapping party in Cite Soleil, a hugely populated — mostly by the extreme poor — neighborhood in Port-au-Prince. Below I’ll recap both of these, along with the other trainings we conducted. After our first week in country, which I summarized here, where we focused mostly on outreach, it was great to get out and do some real mapping. 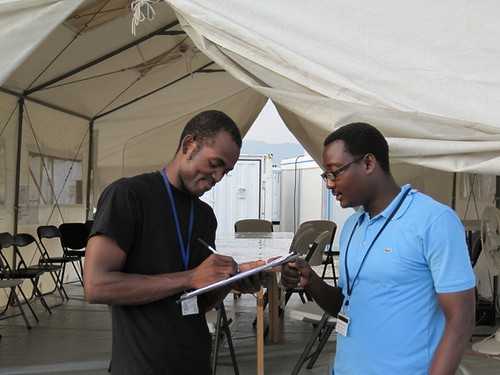 With our surveying trip to Jacmel, we wanted to improve and update the data in OpenStreetMap for the city and train people from local agencies on how to best collect and upload information to OpenStreetMap. The first step in this was to sort out the data models used by the various agencies that collect information on schools, hospitals, roads, water points, camps, and the electricity grid in Jacmel. After a slew of meetings and emails we came up with some basic data points, which we then turned into paper forms and JOSM (Java OpenStreetMap Editor) presets based on the Humanitarian Data Model. With this done we were ready to target priority areas to survey based on existing data, print out Walking Papers, load the OSM pelican cases into the back of a pickup truck, and make the three hour drive to Jacmel.

To do the surveying in Jacmel, we used GPS devices, Walking Papers, and paper forms to collect data on schools, camps, water points, and hospitals. When we hit the ground, we focused on collecting information and data points and training people on how to best do that, and this week the team left in Haiti will check what we gathered against existing data and enter it into OpenStreetMap.

Nicolas and I were accompanied by teams from the International Organization of Migration (IOM), MapAction, and CNIGS, the Haitian government’s geo-spatial agency and who we earlier trained on using OpenStreetMap. This week Nicolas is doing similar work in Leogane, which is right at the epicenter of the earthquake and sustained severe damage.

From our experience in Jacmel, we found that using Walking Papers to help orient the surveyor, define areas of responsibility, and allow for ad-hoc note taking along with GPS and paper assessment forms worked great. The JOSM presets we built made it easy to transfer information collected on paper right into OpenStreetMap, and the short trainings we gave on using GPS devices, Walking Papers, and JOSM seemed to allow new mappers to quickly get up to speed on the process. In Jacmel we worked in teams of three, but would probably be fine with just teams of two. We’d like to do more strategic thinking in order to determine how to best handle indicator data that changes frequently or is very operation specific, and how to best manage the unique IDs that agencies assign to things like camps and schools. We were happily surprised to find out that some challenges we expected to run into — lack of internet access, concerns with sensitive data, and using Walking Papers in the rain — weren’t a problem.

We spent Saturday in Cite Soleil where we met with folks from the Cite Soleil Community Forum, the local INURED initiative, and CNIGS. The Cite Soleil Community Forum in particular is very interested in helping collect and share information about Cite Soleil, which has not received much assistance in earthquake response and recovery efforts — in part due, according to folks we spoke with, to concerns about access and a lack of information about the community. We spent a few hours talking with everybody about their work and explaining OpenStreetMap and the various tools we use in surveying, and then split up into groups and walked around collecting data using the same process we used Jacmel.

One of the many small victories of the week was that Abed from CNIGS, who we trained and who came with us on the Jacmel survey, took the lead in the mapping work and demonstrated to the group how data entry in JOSM works. 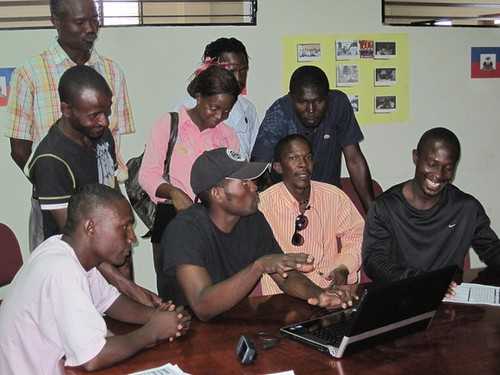 Other trainings and next steps

In between these trips we conducted a lot of OpenStreetMap trainings. By my count we trained 30 new OSM mappers over nine days. This includes folks from most of the agencies working on LogBase, several local and international NGOS, and the Haitian government. Many of them, like Abed, are now comfortable enough to train others, and some will likely need some more assistance before they are ready to go out on their own.

Nicolas is in Haiti this week doing an assessment trip in Leogane (with IOM and CNIGS taking the lead), conducting more trainings (WFP-VAM, reps from Cite Soleil, an NGO called the WINNER project, and DAI are planned), and working on defining plans for longer term OSM projects in Haiti.

The first two weeks of the mission feel successful to us, but some of the gains we’ve made are still fragile. CNIGS has expressed a strong interest in making OpenStreetMap an important part of their work, but this relationship will need continued support. Many of the GIS officers using OpenStreetMap on Logbase, who are now trained on how to contribute, will reach the end of their contracts in the next month and new staff will replace them. Finding ways to establish continuity for OpenStreetMap will be an important part of Nicolas’s last week. The Cite Soleil Community Forum will need a lot of support if they decide to continue to explore the possibilities that OpenStreetMap provides. A possible short-term solution is to facilitate stronger connections between CNIGS, who has expressed interest in slum mapping, and the forum. Longer term it makes sense to have this assistance coming from a local NGO that is working in Cite Soleil, like INURED.

Best of luck to Nicolas on the rest of the mission!