“Open Atrium”:http://openatrium.com/ (formally code named 8trees) is an open source intranet package powered by Drupal that’s fast and easy to install and start using, and open source so you can customize it to meet your exact needs. It’s first public release will be in mid July, and all of its code will be hosted on “Github”:http://www.github.com/ as an open beta. To be first in line to access the code, message “@openatrium on twitter”:http://www.twitter.com/openatrium.

As a team intranet, Open Atrium lets you coordinate on projects with the people you work with — whether that’s to facilitate programs around the world for an international organization, to organize the communications outreach for an advocacy campaign, or to run out simultaneous projects for a software development company. Out of the box you can create different spaces for different projects, add people to each space, and turn on different tools within each space, including a blog, a wiki, a calendar, a casetracker, and a micro blog. 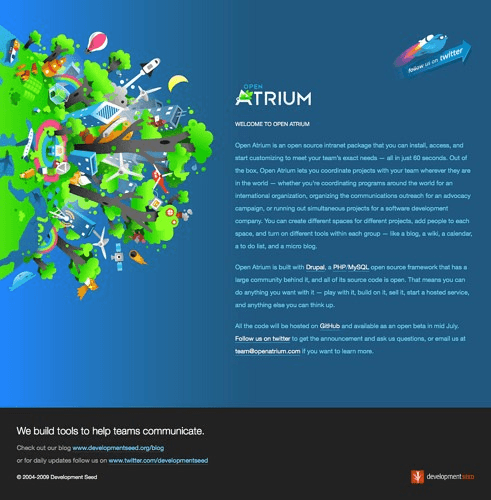 Here are a few screen shots from our intranet showing some of its features:

Open Atrium is extremely flexible, and this makes it different from a lot of the hosted project management systems out there. You can run it where you want to (including behind your firewall), and you can set it to be in your preferred language (English and Spanish currently, with Arabic and Urdu coming soon). And since you have all the code, you can customize it however you’d like, and you can do anything with it — like building on it, selling a customized version, starting a hosted service, or something else entirely.

We’re finishing a closed alpha release in which more than 30 Drupal developers reviewed Open Atrium, and we’re adding some final functionality that an international development project is sponsoring. The public beta release will come out shortly after those are wrapped up — in about four weeks.

We’ll be talking more about Open Atrium in the coming weeks. To learn more and get the beta release announcement, follow “@openatrium on twitter”:http://www.twitter.com/openatrium or email us at [email protected]

We can’t wait to hear what people think once they access the code.