The familiar file-based layer menu in TileMill now accepts tabular files (with the .csv, .tsv, or .txt extension) for direct rendering. CSV files can be read locally or via URL. 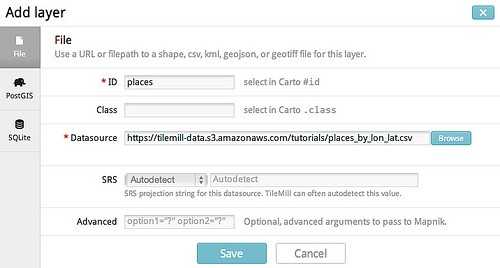 Many programs can edit CSV files, but LibreOffice is great because it can edit tabular files directly without needing to export a copy. So a file like this can be opened in both LibreOffice for editing at the same time as it is being rendered in TileMill.

Simply save the document in LibreOffice (using “Keep Current Format”) and then re-save your TileMill project and the updates will be immediately visible in your map.

This support is driven by the new ability for CSV format detection and parsing in Mapnik, the library used under the hood in TileMill for rendering. Because the CSV format is not strictly defined, Mapnik works to auto-detect various characteristics like the delimiter used to separate values (commas or tabs are currently supported), the type of newlines (unix, mac, or windows style), and the data types (integer, float, boolean, or string). Finally Mapnik detects fields containing coordinates using column headers, meaning any fields named x, lon, long, or containing the word longitude will be parsed as the x coordinate and fields named y, lat, or containing the word latitude will be parsed as the y coordinate. EPSG:4326/WGS84 is the assumed projection. If no coordinate fields can be detected, then the CSV is not considered valid. If you have CSV files with only addresses, then you should first geocode them.

This release brings major new advances for desktop users of TileMill on Ubuntu and Mac OS X. The Mac OS X app now supports a clean one window interface, avoiding the need for a separate browser window. This feature leverages the latest support in Mac OS X for WebKit, the core technology behind Safari and Chrome. We’ve also focused on Mac OS X 10.7 Lion support and have added fullscreen support, which really lets you focus on map editing in a whole new way. 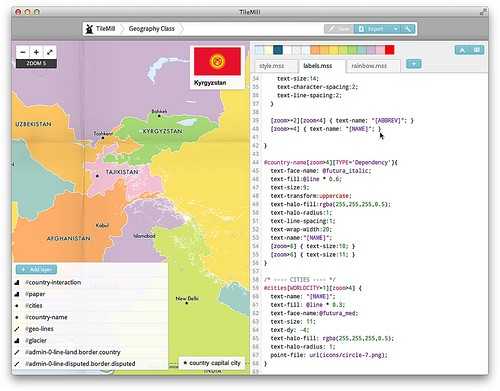 On Ubuntu, TileMill files are now kept in ~/Documents/MapBox by default, you can start TileMill from the ‘Graphics’ section in the Applications menu or launcher, and the process runs as your current logged in user - which will make permissions simpler for sharing data. But for a headless Ubuntu server installation, you can continue using TileMill as a server process using upstart. See the upgrade notes for more details.

Other features and fixes

Additionally, in this release users will find:

Download the latest TileMill release to check out these improvements, and as always, please post questions, feedback, and bugs to support.mapbox.com.